The Julian Wildflower Show has been an historical event for over 90 years. Because of Julian’s mountain valley location, bordering a national forest and close to the Anza-Borrego State Park, we have 855 species of plants within 25 miles of town, many of which were used by Native Americans. The Wildflower Show is meant to educate club members, local residents, out-of-town visitors and children about the botanical wealth of Julian and its vicinity.

You know that a lupine plant has many small flowers on each stem. But did you know that a lupine changes the color of a particular flower to signal bees when the pollen and nectar of that flower has already been taken by another bee. The bees know to go on to other flowers and not waste their time. The lupine plant benefits by a more efficient and successful pollination. In the past people thought animals were not smart; they were even referred to as “dumb animals.” Now we know otherwise. Consider dogs, cats, horses, dolphins, and pigs to mention a few. They are known to be quite intelligent.

But what about plants? Past and current research is showing that plants are much smarter than we thought. The lupine is one of many examples. They can acquire information, communicate, problem solve, and recognize their own kind. We need to think of plants in new ways. Hence last year’s wildflower show theme – “Smarty Plants?”  The show itself will be basically the same as in past years, but will include information on the capabilities of plants. It is hoped that the theme will interest people in coming to the show and in viewing plants in a different light. 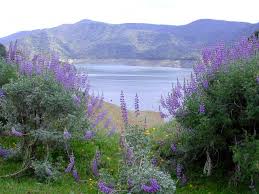